New features and colours for the MH3, MH5, MH7 and MH11 headlamps

June 2020: Ledlenser, the German lighting specialist, is giving its MH product range of headlamps a comprehensive feature and colour upgrade. The MH5 is now equipped with the practical Magnetic Charge System, which makes charging even more convenient. In addition, it also now sports a red light feature to maintain night vision. The three fresh colour versions black-yellow, black-orange and black-blue are newly available for the MH3, MH5 and MH7; the flagship MH11 is newly available in black-orange. All innovations are based on extensive customer feedback. Ledlenser is also presenting the Powercase as a practical accessory that enables the headlamps to be carried safely and, at the same time, offers the option of charging them during transport.

The popular MH5 headlamp has undergone a major upgrade with updated features for 2020. The additional red LED light on the front side is an important new feature, e.g. for maintaining night vision, and will appeal to demanding users in the outdoor community. In addition, the MH5 is now equipped with the Magnetic Charge System, which enables convenient charging via magnetic contact without having to remove the battery from the lamp. Frequent travellers to remote regions will also appreciate being able to operate the MH5 with a standard AA battery. With a light output of 400 lumens, the MH5 achieves lighting ranges of up to 180 metres; optionally, the low-power mode achieves a lighting range of 40 metres with 20 lumens of light output. The MH5 is seamlessly focusable thanks to the Advanced Focus System. The lamp head can be easily clipped off and flexibly attached with the integrated metal clip. At 94 grams, the MH5 is a true lightweight and the ideal outdoor all-rounder.

The new Ledlenser Powercase is a transport box and power bank in one: the elegant textile pouch enables the headlamp to be securely transported. At the same time, the transported lamp can be conveniently charged using the integrated Magnetic Charge System. The battery has a 5.000 mAh capacity. In addition to the integrated charging of the compatible MH4, MH5, MH7 and MH8 headlamps, the Powercase also offers the practical option of being able to charge other electronic devices via the external USB port. 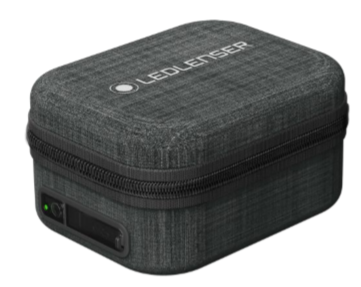 The MH11 is the flagship in Ledlenser’s MH range of head torches. In model year 2020 it will now also be available in black and orange. The features provided by the lamp for the most demanding applications remain unchanged. Thanks to the Ledlenser Connect app, it offers a variety of useful functions. These include assigning individual switch profiles and features such as the timer, interval function and SOS distress signal. With up to 1000 lumens in Boost mode and 750 lumens in power mode, the Ledlenser MH11 achieves an enormous light ouput. In Optisense mode, the MH11 automatically adapts to the existing lighting conditions. An RGB LED also provides light in red, green or blue colours, making the MH11 an individual all-round talent for the highest demands. 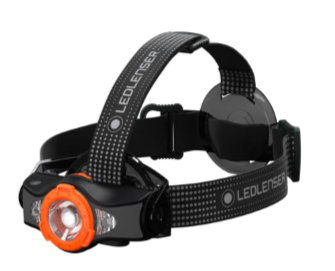 The MH7 is aimed at demanding users who want to have sufficient power reserves for various applications. In addition to a light output of 400 lumens and a lighting range of up to 180 metres, it features an additional Boost mode that can temporarily provide up to 600 lumens and a lighting range of up to 200 metres. In addition, the MH7 offers two further dimming levels and a Blink function. The additional red LED light and the Advanced Focus System round off the extensive package of features. The MH7 is also charged with the practical Magnetic Charge System and can optionally be operated with conventional AA batteries. As with the other MH models, the MH7’s lamp head can also be removed and thus offers a wide range of applications as a handheld lamp. The transportation lock prevents the lamp from being turned on inadvertently while in the backpack waiting to be used. The additional strap on the headband, which runs over the head, increases stability, but can also be easily removed at any time.

The MH3 is an inexpensive entry-level model with considerable features. With 200 lumens of light output, it achieves a lighting range of up to 130 metres. In addition, the MH3 has a low-power feature which, with 20 lumens, can still achieve a lighting range of up to 40 metres. The Advanced Focus System allows the light beam to be seamlessly focused with one hand. The MH3 is powered by the supplied AA battery or alternatively by an optionally available lithium-ion battery. Overall, the all-round headoffers a better-thanaverage performance package and weighs just 92 grams.